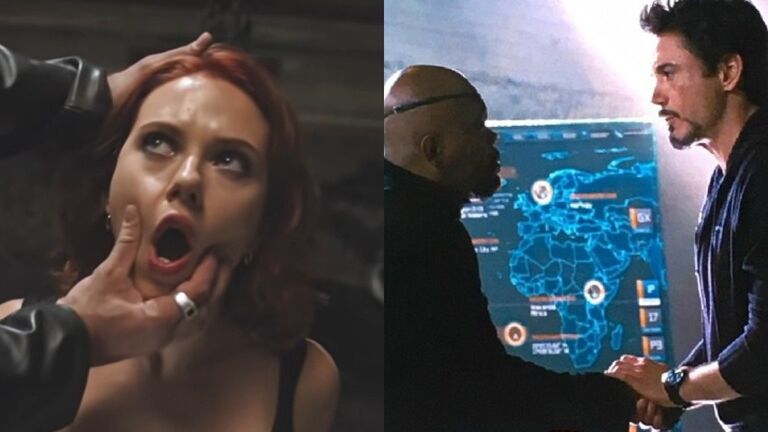 The Marvel Cinematic Universe is over a decade old now, and every one of its productions is jam-packed with astonishing sights. Some of these visual details have been snuck in as sneaky Easter eggs for the fans, but others are goofs that the creators would rather you didn’t notice at all; and then there are the shots that’ll have you cheering... or perhaps leaning in for another look. Did you catch all 20 of these often-paused moments from the MCU?

If you’ve ever seen a Marvel movie at theaters, you will be well aware that when the credits start to roll, it’s not the end of the experience. Those in the know stick around to watch the coveted after-credits scenes. The Thanos reveal at the end of The Avengers was one of the most popular, and for good reason.

Josh Brolin starred as the grinning Thanos, identifying the “mad Titan” as the puppeteer behind Earth’s woes. As soon as The Avengers reached DVD and Blu-ray, fans flooded the internet with stills of the reveal shot. It turned out Thanos was the threat everyone feared. “I don’t feel so good, Mr. Stark!” I’m not crying, you’re crying.

Did you know that in The Incredible Hulk you can actually see Captain America’s frozen body? Don’t feel bad if you missed this one, it’s not in the regular cut. It’s actually only something you can spot in a deleted scene that the DVD and Blu-ray version of the movie featured.

Director Louis Leterrier originally planned to add the “capsicle” scene in the main movie, but it was later removed. They relocated The First Avenger’s body to a place that any old enraged green radiation monster couldn’t just stumble upon. Interestingly, the scene was also Bruce Banner’s attempted suicide he mentions in The Avengers.