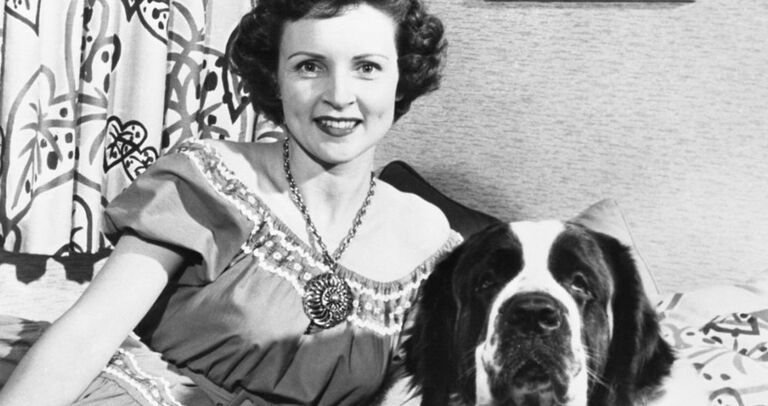 Marilyn Monroe. Clark Gable. Audrey Hepburn. Humphrey Bogart. The stars of Hollywood’s Golden Age have transcended the screen – they remain pop culture and artistic icons half a century after their heyday. And, while you’d recognize their faces anywhere, you wouldn’t be able to pinpoint their pets in a line-up. These incredible photos will introduce you to the animal companions of the biggest stars of this era. Whose dog had 13 puppies? Who lets a lion live in their home? Who adopted an adorable baby deer? You’ll have to read on to find out.

Golden Age director Chester Franklin received a pet puppy from one of his actors – an actor who just so happened to be a dog. Here we see Peter the Great, a canine who, it was perhaps dubiously claimed, displayed near-human levels of intelligence, presenting the filmmaker with the pooch in the basket. Previously, Franklin had directed Peter in his 1925 flick, Wild Justice.

39. Bette Davis and one of her many Scotties

Bette Davis was the first actor in history to earn ten Academy Award nominations. At the same time, she racked up quite the collection of pups. Here, we see her with one Scottie, but, at some point, she had four of the wiry-haired terriers to her name. Davis also made a point to care for homeless canines, a cause she served while raising her own family of pooches at home.

The Library of Congress

Songstress Billie Holiday’s legacy will always be as one of jazz’s most influential and talented artists. Behind the scenes, though, she had another reputation as a dog lover. And, although no parent should pick favorites, rumor has it that Lady Day had a special place in her heart for this guy, a boxer named Mister.

37. Joan Fontaine and her feline counterpart

Joan Fontaine had a prolific acting career, which included an Oscar win for the Alfred Hitchcock film, Suspicion. But the press tended to focus on her strained relationship with her sister and fellow star, Olivia de Havilland. That was an unfortunate choice – they could have just focused on the happier facets of her life, such as her relationship with her Siamese cat, seen here in 1966.